A Memorial Design in Kutch

Veteran architect Hiren Gandhi approach towards any project is based on his clients’ brief and the given frame work of economics, climate and site constraints. Innovative design solutions constitute the architecture to suit the particular context, as was the case with the memorial design, where he resurrected the period of India’s struggle for freedom.

Gujarat Government planned to set up a memorial for freedom fighter Shyamji Krishna Verma at his birth place at Mandvi in Kutch District of Gujarat. Architect Hiren. A. Gandhi, founder of the Ahmedabad based architectural firm Hiren. A .Gandhi & Associates presented a design that was inspired from a historical site in London

A land ad measuring approximately 25 hectors was allocated to the Shyamji Krishna Verma trust and a limited design competition was floated among a few short listed architects. The concept & design presented by Hiren. A .Gandhi & Associates revolved around India House in London which was the residence of the freedom fighter to whom the memorial was dedicated. 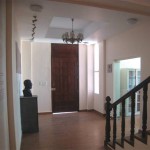 The house occupied by Shyamji and his wife in the year 1905 was the hub of freedom fighting struggle outside India. Many renowned freedom fighters like Veer Savarkar, Madalan Lal Dhingra etc. had stayed in India House at that time and the structure thus held a great historical significance.

The India House built in the Shyamji Varma memorial complexcalled Mandvi is modeled on the pattern of original India House located on 65, Cromwell Avenue, London which was at the fulcrum of freedom movement carried out by Pandit Shyamji Varma during his stay in London.

The project was completed over a span of one year. The objective of the memorial was to house the ashes of Shyamji and his wife brought by Chief Minister to India from Geneva as per wish of late Shyamji. Also it had to house an exhibition on life and times of Shyamji. 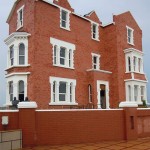 The design of the India House in the memorial complex is similar to the detached Victorian house built in 1865 in London. It houses library and audio visual room on the ground floor and picture gallery on the upper floor. A lift has been incorporated in the plan for the visitors and a ramp has been provided for the physically challenged. Amenities such as cafeteria, souvenir shops, amphitheater, children play area, senior citizens’ corner etc. were added for convenience of the visitors.

The external elevation, features the overall proportion of the original India House to offer the authenticity and provide a physical connect with the history. The whole idea fits idealistically in the context of the project and motive of the memorial taking the visitor to the bygone era.

Previous Contemporary Architecture & Architects in Gujarat.
Next Designing with respect to climate