A visit to  Bhendi Bazaar is reminiscent of Mumbai of yore with its architecture, ambience and usual hustle-bustle. But one cannot fail to notice the glaring neglect of this centrally located neighbourhood and its crumbling infrastructure. However, ` 4,000Cr makeover by Saifee Burhani Upliftment Trust (SBUT) is set to change it all, albeit in the next 8-10 years or so.

This was originally a part of the inner-city area developed by British to provide housing for traders (mostly Dawoodi Bohra, Memons , Gujaratis, Sindhis, Parsis and Katchis) working in the harbour of Old Bombay The colloquial pronunciation of ‘Behind the Bazaar’ (Crawford Market) in English became ‘Bhendi Bazaar’ for the locals and has continued as such.

The buildings developed in the ‘Chawl’ or dormitory fashion to house single men who had moved to the city for earning a livelihood, over the years were transformed into family tenements accommodating trader’s families. “The forced closeness resulted in a distinct community culture and organic growth of the area but, over time, neglect by the building owners, inefficient government policies and increasing population pressure led to Bhendi Bazaar’s gradual decline. One of the biggest reasons was perhaps the Rent Control Act of 1947, due to which building landlords were unable to maintain the buildings, “briefed Abbas Master CEO, SBUT

Bhendi bazaar is one of the first projects to be undertaken under MCGM new Development Control 33(9) rule for cluster redevelopment. It certainly is the largest and most complex and the only one to be funded completely by a private trust with rehab to sale component ratio of 80:20

Today, Bhendi Bazaar is home to more than 20,000 people living in dilapidated buildings with congested streets, no green spaces or playground. The area is serviced by infrastructure that is more than 150 years old, is deprived of footpaths and sufficient system for waste disposal. Many buildings made of wood and brick are structurally weak
and state of the roads makes it almost impossible for vehicular traffic movement. Lack of proper sanitation and fire safety measures leave the population very vulnerable to natural and man-made calamities. The project comprising approximately 16.5 acres of land currently has about 250 decrepit buildings. “Given the large and complex scale of development, SBUT has engaged Indian and international consultants for all aspects of the planning, construction and maintenance. Perkins Eastman International, USA and Mumbai based urban designer & city planner M.E Eran & Associates are the consulting architects. Mandviwala Qutub & Associates are the master planners and architects of the project and Tricone has been engaged as the architects for the memorial mausoleum Raudat Tahera complex. Other consultants include Sterling Engineering Consulting Services for structures, AECOM for MEP &. infrastructure, for vertical transportation Tak Consulting and Systra MVA Consulting for traffic planning & movement,” elaborated Master. 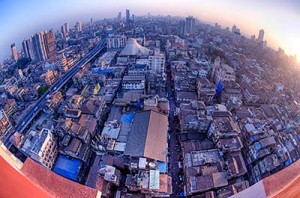 The proposed sustainable development will contain 17 new buildings with green open spaces, roads and highly visible commercial area. It has been planned in such a way that the existing six religious structures will be retained in their present location while overhauling the entire road network. The site divided in clusters will be redeveloped in a phased manner. The project is divided into nine sub-clusters with each subclusters having two buildings. This is a rare project where 80% of the project land will be used to rehab the existing tenants (commercial & residential) and just 20% will be used for the free sale. The proposed roads are designed to encourage pedestrian movement and various building services like water supply, electricity, waste management etc. have been designed keeping  in mind the requirements, 10 years from now.

“Currently construction in subcluster 1 & 3 is underway while work on other sub-clusters is planned simultaneously. The Trust has so far demolished more than 70 buildings. During demolition, unique architectural elements like wooden doors, windows, balustrades, etc. were removed and archived carefully so that they can possibly be showcased later,” added Master.