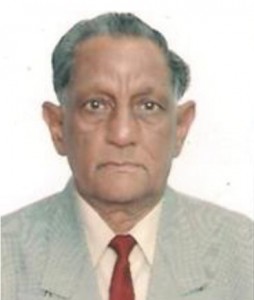 More than 10 million new vehicles of all types are added each year to the Indian roads leading to the increase of about 30 million discarded tyres each year pose that a serious threat to the environment. Tyres are recyclable yet significant number are added to existing tyre dumps or landfills. Interestingly, this accumulated waste materials can be very well used in construction, says Kaushal Kishore, Consulting Materials Engineer, Roorkee

Tyre rubber crumb is produced by an ambient process (mechanical sizing) or by cryogenic process (freezing). In the mechanical process, tyres are reduced to chips or shreds and then put through granulators which separate and remove loose steel and fiber and further reduce rubber particle size. Finally, the small rubber chunks are ground to produce rubber crumb of 30 to 80 mesh size.

Density: Tyres are slightly heavier than water and will sink in water unless entrapped air provides enough buoyancy to allow them to float. This generally occurs only with whole tyres or fine crumb rubber.

Moisture absorption: Tyres and shreds can trap water on the surface and in irregular contours, but they are relatively impervious to actual absorption. Various studies cited in ASTM D 6270-98 indicate maximum moisture absorption of 2-4%.

Temperature Tolerance: Tyre rubber is capable of withstanding a full range of ambient temperature extremes without undergoing permanent property change. Some properties like flexibility change as a function of temperature, but the change is reversible and repeatable.

Leaching Characteristic: Tyre shred leaching characteristic have been examined under a wide range of pH conditions. Extensive practical experience has conformed the absence of any deleterious impact.

Flammability: Tyres shreds have a reported flash point of 3060C, higher than some other building materials used for Architectural purposes such as wood, paper, foam, and fabric. When crumb rubber is combined with cement and sand, this may control the flammability of the resulting product.

The following are the possible causes in strength reduction of rubcrete mixtures:

While in structural concrete, strength is one of the important factors. For nonstructural concrete such as rooftop rending for insulation and water proofing, rubber mixture may be a suitable material. As, it has the property of insulation as well as flexibility required due to the movement of slab.

In due course of time, cement-sand rending cracks even when mixed with polymers, and the leakage of water starts again. In the present study it is to be seen that rubber mixture when applied as rending on cracked roof surface in the natural roof movement cycle, does it cracks and cost wise is it almost equal to conventional roof treatment construction. 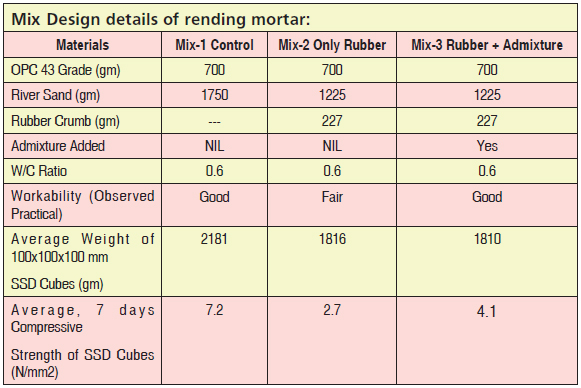 Materials used were Cement OPC 43 Grade conforming to IS: 8112- 1989, and River Sand & Crumb Rubber as mentioned in the Table.:

After many trials and testing, with the given set of materials, three mixes were finalized out of which Mix No. 1 is well known and it is not used in the rending. Mix No. 2 showed lower strength while, Mix No. 3 was found satisfactory in all respects. 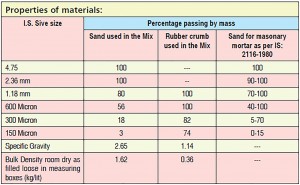 The treatment with rubber crumb for water proofing and insulation gives long lasting performance beyond one year at an approximate cost of Rs. 29/- per sqft. However, no fixed mix design can be considered appropriate for all applications. Mix design has to be worked as per the site materials and roof & site conditions. The advantages of the treatment include utilization of waste material, lower density resulting in reduced load on roof, flexible materials which do not crack and cost effectiveness.