Renewable energy and alternative sources of energy are the buzz words in the building industry today. In response, architects and engineers are increasingly incorporating energy saving technologies in their designs. One such affordable design solution is the integration of a solar energy system that creates electricity by optimizing the building envelop. 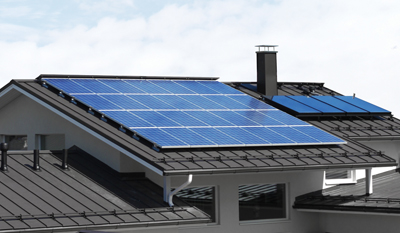 Solar roofing is fast becoming the preferred alternative to conventional roof materials with its increasingly recognized economic benefits. The heating and cooling costs can be cut by up to 30%, simply by installing solar roofing systems. The popular form of solar roofing worldwide is solar panels that are silicon solar cells encased in tempered glass with plastic backing. The array of panels is held in place by racks or frames attached to roof-based mounting supports. This type of solar roof installation requires minimal changes to the existing structure but increases the roof load and many consumers are put off by its obtrusive appearance. The recent creative and attractive alternatives to the traditional system of solar panels are the integrated BIPV panels, thin film solar tiles and PV laminate sheets. As Raghunandan, Vice President- PV & Engineering, Kotak Urja Private Limited explained, “Roof PV systems are being integrated into the roof wherein the roof is covered with PV modules or tiles which contain solar cells. The two technology approaches for constructing an integrated PV in a building are crystalline and thin film PV module. The two low iron tempered glasses are sandwiched using solar cells to form a laminate used as glazing and in case of crystalline modules, a part of natural light is transferred into the building through the modules. This allows the building to receive natural light along with power generation. Also, eliminating the design limitations architects and designers are the advanced solar cells made of different colours.”

This innovative solution integrates solar power system into buildings aesthetically. The panelling system can be included with all common roof materials like concrete, terracotta & steel tiles and steel and aluminium sheet profiles. Minimal or no changes to conventional structures are required and building tolerances are allowed for, which makes it suitable for not only for new construction but also roof replacement projects. The BIPV panels are laid on specially designed framing layout of drainage channels and mounting brackets like conventional roof tiles. This ensures no build up of dirt and leaf litter around the external framework, thereby eliminating any potential damage to the solar modules and roof. Water and debris simply wash off the panels straight into the gutter.

PV laminates consist of extremely robust amorphous silicon thin-ﬁlm modules attached to aluminium carrier panels. These can be installed on other system elements such as trapezoidal sheets or any roof shape, giving architects and engineers maximum design freedom and a flexible retro-ﬁt solution for installation on existing structures. PV laminate is a superior method of integrating photovoltaic with metal roofing. The laminates have a peel and stick backing that enables them to be attached to the metal roofing panels in the shop or at the site. When applied directly to the standing seam metal roofing of dark colours, it is hardly discernible from ground level. Photovoltaic laminates work well in cloudy, low-light environments, capturing different light wavelengths and allowing current to flow around shaded areas of the laminate. They also perform well in coastal conditions and in industries where there is a lot of airborne dirt and particles. Moreover as they are directly applied to the metal roofing and do not require framing, they are cost effective than conventional solar panels.

Most solar tiles are 12 inches wide by 86 inches long and can be fastened straightaway to the roofing. The lightweight tiles or shingles look like normal tiles and installation process is similar to that of normal roof tiles except that solar roof tiles must always be bordered by normal roofing tiles. The tiles are coated with photovoltaic cells made of amorphous silicon. They can be designed to look like conventional asphalt shingles and can be used instead of roofing materials such as asphalt shingles, standing seam metal roofing and slate or concrete tiles. Also, solar tiles can be blended with existing asphalt roofing tiles, are waterproof and designed to withstand heavy sun and natural elements. 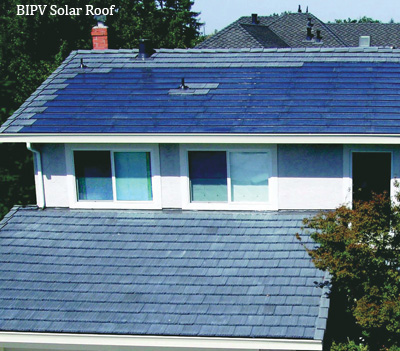 Transparent solar modules offer the most attractive building integrated PV solutions. The modules use double low iron tempered glass with solar cells laminated in between and are ideal for roofs, skylights and facades. For roof-integrated transparent modules, usually glass-glass laminates in which crystalline cells are placed at varying distances from each other, without frame are used. Quite often they are also a part of shading devices whether movable or not. Such systems are known as shadow-voltaic systems. Moreover, with coloured back side transparent BIPV modules, interesting architectural visual effects can be obtained and are often used in old heritage buildings. For special roof types like curved roof, plastic laminates are used. They are most often produced from plastic materials like plexiglas® or polycarbonate.

Evidently, the primary advantage of these new solar roofing systems is their light weight, simple installation and no need for any attachments or modifications to the existing roof. But most importantly, they are available in range of sizes, shapes and colours which can integrate with the existing roof to appear virtually unnoticeable.

A radical departure for Pritzker Prize winner Japenese architect Toyo Ito (he’d never designed anything like a stadium before) the stadium design executed by him was radical too. Dramatically light for such a heavy building, the project looked as unusual as the sports it hosted. But its secret weapon was its solar-powered skin, which made it the world’s first stadium to draw most of its energy from the sun.

The heavy reliance on steel at stadiums often gives these buildings an environmental footprint that green technology can’t easily offset. In Taiwan, a new logic is at play. The stadium’s greatest asset is its open and seductive design, one of the finest elaborations of an ethereal architectural approach. So the roof, a spectacular web of 32 spiralling steel pipes set atop a primary skeleton of concrete ribs is designed such to unfurl on one of the stadium’s short sides, with two extensions that curl outwards. “The resulting structure suggests an open-ended, natural contour, as appropriate for sports as it is for the Internet era.” says Ito.

Indeed, technology may be an integral part of this project, but it isn’t a crutch. While photovoltaic panels are often tacked onto buildings including stadiums, the ones used in Kaohsiung are anything but an add-on. Ito went all out, covering the entirety of the 22,000sqm roof in waves of 8,844 photovoltaic panels, embedded in frames of laminated glass. Ito also set the stadium on a 15-degree angle along the north-south axis to protect spectators from sun and maximize natural ventilation. “Since solar panels were required for this project, I thought to use them to cover almost the entire stadium seating roof, “says Ito.

Kaohsiung stadium’s helical roof is like the cross-stitched bulbous plastic façade. Fitting the 8,844 solar panels along the roof’s curving spiral to create a smooth, snake-like skin was the project’s greatest challenge as per the designer.. The panels are capable of providing the stadium with 80% of its electricity during game time, and of eliminating some 660 tons of carbon dioxide a year. The building’s self-sustainability is also considerable insurance against the dreaded “white elephant” label that Olympic stadiums tend to earn after their first use: when it is not hosting an event, the stadium becomes a de facto power generator, capable of powering the building’s 3,300 lights and two jumbo screens. When it’s not being used, officials have estimated, the stadium can sell enough electricity to the local power utility to earn the city government over $150,000 per year.