At a time when the world is passing through climate change crisis, Mangalore based Beary Group, the real estate developers and property development & project management company has built a mosque that demonstrates sustainable and green architecture.

Badriya Juma Mosque is located in a picturesque village on the Arabian coast in Kodi, Udupi district of Karnataka State, India. The place has a hot and humid climate. The trustees decided that the mosque design must encompass all facets of Islamic architecture and at the same time be a modern design attracting everyone, including non-Muslims and thus promote harmony and bonding between people of all religions.

The members of the community which the mosque served were economically poor and the challenge was to minimize the power consumption but, still provide an aesthetically beautiful and cool building complementing the verdant green surroundings. Thus, the mosque was designed as a “Zero Energy Building” by generating renewable electrical energy to meet its requirements.

The mosque was conceived as an open structure allowing natural ventilation with orientation and architecture to minimize solar heat gain. The green surroundings and water ponds/sprays were developed to cool the ground and building. Energy usage was reduced through LED lighting, energy efficient fans and by generating hybrid (wind & solar) green energy at site. The building has weather resistant and earthquake proof RCC structure.  Practically there are no walls in prayer hall and in other places AAC blocks have been used for walls.

An anchor and a landmark

The development of pathways with laterite also formalizes the connection with the sea and inland areas with a ceremonial entry along the beach road. This allows the locals as well as visitors who visit the nearby beaches to be a part of this experience with the land, the community and its culture. 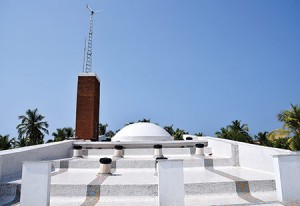 The elevated nature of the new prayer space reconnects it with the surroundings, essentially the geography of the place binding one to the beauty of the nature. White Makrana marble flooring, white colour in interiors and Calligraphy bring in a spiritual dimension to the experience that people using the place identify with.